The Mouth of a Shark

I am a theatre director creating a piece called "The Mouth of a Shark" about the experiences of individuals who leave the place they call home. In this documentary theatre piece, Irish emigration narratives will be counterpointed with stories of people who have come to Ireland recently, seeking asylum. As part of show's development, we are looking to interview Irish emigrants living worldwide. I am hoping to connect with people who left Ireland for social or political reasons

Today in history - 19th October 1989 - The "Guildford Four" Gerard Conlon, Patrick Armstrong, Carole Richardson and Paul Hill are released after serving 15 years in prison. This Saturday, 21st October (3pm) as part of Manchester Literature Festival, we are hosting 'Life After Life - A Guildford Four Memoir' with Paddy Armstrong and Mary-Elaine Tynan. Tickets are £7/£5 - Manchester Literature Festival "On the 5th of October 1974, the IRA detonated two bombs in Guildford, and

Champions League at the IWHC 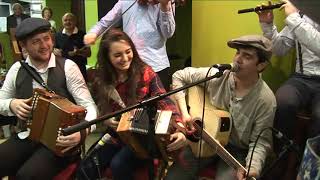 We are delighted that the Kilkennys will preforming again at the Irish World Heritage Centre on 2nd February 2018. If you missed them last time, you missed a fantastic evening. -The Kilkennys live on The Late Late Show- TICKETS Tickets are priced £15 + booking fee. Call us on 0161-205-4007 Visit the Centre located at 1 Irish Town Way, Cheetham Hill, Manchester, M8 0RY or purchase them on Eventbrite: The Kilkennys

Are we ready for the north west rivalry? Liverpool v Manchester United live on all our screens tomorrow from 12 noon (KO 12.30pm). Complimentary food during half-time. Everyone welcome at the IWHC. Family-friendly. Live Sport. Live Music. Reminder - IWHC members get 10% off food and drink (Does not include off shop groceries). Live sport all afternoon in the bar. Live music with Whiskey in the Jar from 9pm.

Great news, IWHC members now get 10% off all food and drink (does not include groceries in our Irish shop).

The President of Ireland's message on the death of Liam Cosgrave